For those using an HP ProLiant N40L MicroServer as a home lab for their ESXi adventures, one concern you may have is over the limitation of 8 GB of memory that is stated in the supported specifications. 8 GB puts up a barrier in some cases where you’re starved on memory but still have a lot of the dual core AMD Turion II processor left over. This limitation tickled my curiosity, along with the requirement of ECC UDIMMs, to the point where I’ve been trying a various assortment of memory sticks to see if I could get them to work.

I’ve recently acquired and successfully tested a pair of Corsair 8 GB sticks (purchased from Amazon) that are very budget friendly and do indeed work. They have also shown no signs of buckling under some load testing pressures with both Memtest and Prime95, my two stress tests of choice.

In a prior video review of the N40L, I stated that some others had adventured into the realm of hitting 16 GB using a combo deal overseas. Well, now you can do the same for about $80. 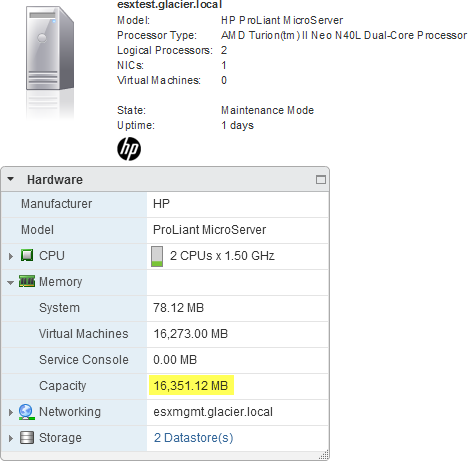 If you’d like to populate your N40L with a pair of 8 GB sticks, I recommend you cruise on over to Amazon and acquire these sticks:

They are currently going for around $39 a stick and qualify for Amazon Prime shipping. Keep in mind that, as the title states, this is a single stick – order them in quantity 2 for the N40L. It’s a bit of a pain getting all the wires and such out of the way to remove the motherboard tray but well worth the trouble. Once inserted, I was able to power on my N40L without any additional configuration, connected the vSphere client to the management IP, and saw the results above.

The wrong kind of RAM

Although the dual core Turion II is still a bit on the lean side for my tastes, the ability to boost the N40L into 16 GB of RAM for cheap opens up a lot of possibilities. Not only can it easily run a handful of VMs for a home lab but it may also be a good target to install Nexenta on in lieu of a NAS box. The extra memory provides a good amount of cache for the ZFS-based array to consume, and the community edition can handle 18 TB of data at no charge which should nicely cover the 4 ~ 6 drives that the N40L can house (depending on if you use the eSATA port and DVD port for drives).

I’d say that if you’re starting off a home lab this is a great box to consider. Later, if you grow out of the hardware, you can still use it as a NAS box, a management ESXi server, or even as a test ESXi host for trying out oddball configurations with.

Are you considering expanding up to 16 GB of RAM? Care to share your experiences and configurations of the N40L? Leave a comment below!