Veeam has been a part of my technology landscape ever since releasing version 4 back in 2009. At that time, the company was rather refreshing in their focus on backing up virtual machines as an entity, rather than something to shove a guest agent into, which was a new enough concept for the time. I’ve enjoyed working with their team to provide feedback (because they actually listen) and applaud their efforts to provide free NFR licensing to a vast number of technologists in several communities.

I’ve taken the time to upgrade my lab installation of Veeam from version 6.5 to version 7 and outline the steps taken here, along with some impressions on two new key features.

I find it important to complete a few preparation steps before diving right into any upgrade. Namely:

I have daily full backups of all my SQL databases, making that step a non issue. I did end up powering off the Veeam server, taking a snapshot, and powering it back on. This serves two purposes: I know I have a rollback plan and I just verified that the server is healthy enough to survive a reboot. You’d be amazed at how long a system partition can be corrupted without notice (until someone reboots the server).

Upon inserting the Veeam ISO file, which is the new install format with version 7, into my virtual machine and running setup I was greeted by this friendly installation screen. It kind of reminds me of the new Windows 8 style of art used with the Start tiles. I clicked the Veeam Backup and Replication “upgrade” button. 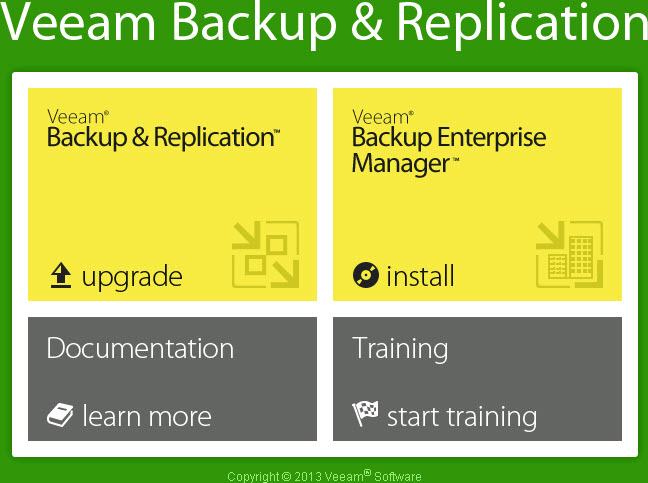 The upgrade installer asked me to accept the EULA and other standard questions. Then a list of the products and versions installed appeared, which verified the software installed on the server.

The next step prompted for a license file.

The Veeam installer completed a system configuration check to ensure I had the supplemental packages installed. If any did not pass the test, I would have needed to resolve the item and re-run the check. I was lucky enough to pass all the tests on the first try. 🙂

I then provided a service account that has full dbo (database owner) rights on the Veeam database, along with Full Control authority on the catalog folder. I like to use a specific service account, which is a user named “svc_veeam” for all Veeam services.

The next screen wanted information on my SQL database. In my case it was automatically populated with the correct information, but it can be edited if necessary. Once I clicked Next, a nag screen appeared warning me that the database will be upgraded to the new version (make sure you have a backup!).

I clicked Install and basked in the warm glow of a progress bar. My upgrade took about 5 minutes. Time to fire up version 7!

My next tasks are to test a few of the enhancements listed for version 7: Parallel Processing and Transparent backup of the vCenter Server VM.

The first new feature I tested was parallel processing. This allows the backup job to process multiple virtual disks and virtual machines in parallel. Sounds neat, right? There’s a fair bit of “dead time” in a backup where the system is waiting on vCenter to perform certain tasks, so this feature should eat up a lot of that time.

The feature is NOT enabled by default after the upgrade, so you’ll have to turn it on by navigating to Options > Advanced > Parallel Processing > Enable check box.

Note for users upgrading to v7: By default, all behavior-modifying engine enhancements, such as parallel processing, Backup from Storage Snapshots and the new default compression level, are not enabled upon upgrade. This ensures your existing jobs do not change behavior when you upgrade to v7. (source)

To verify the value of this feature, I ran the following tests to try and see how much time savings I could gleam when the data set were not an issue:

In order to back up the vCenter Server VM in Veeam version 6.5, I had to create a job that specifically connects to the host that vCenter is on and back it up directly (as per KB1051) . Otherwise there is a moment where vCenter is non responsive and the backup server fails the job because a snapshot would never occur. This is supposedly fixed in version 7, so let’s put it to the test!

To begin, I created a new job that tries to backup the vCenter Server VM via vCenter. I then kicked off the backup job twice and noticed that it completed successfully both times. Awesome!

And here’s a view from the vSphere Client showing the successful creation and removal of both sets of backup snapshots.

I’m only scratching the surface of all the new improvements, but must confess that I use very little of the advanced features in my lab on a day-to-day basis. The upgrade process was very simple and painless, and I noticed that all of my jobs continued to work as expected even after the upgrade. From an operational standpoint, I’ve noticed quite a few new ways that Veeam version 7 displays data that makes life easier (such as the lower pane of details on a backup job). Backups complete even faster than  in version 6.5, especially when parallel processing is enabled, which is something that can help drive down backup window times or increase the volume of VMs that can be backed up.