My latest switch, the Cisco SG300-52, isn’t all that loud in the grand scheme of things. In fact, you can read about my experience with the switch, including noise meters, here.

However, I like to keep my home office as quiet as possible because it shares space with my lab (details here). This post will cover the steps necessary to replace the stock pair of Delta AFB0412LB fans with Scythe Mini Kaze Ultra silent fans (SY124020L).

Once that’s done, you’ll note the two 40mm switch fans near the PSU. Remove their threaded screws with a larger Phillips head screwdriver and save two of them for later. 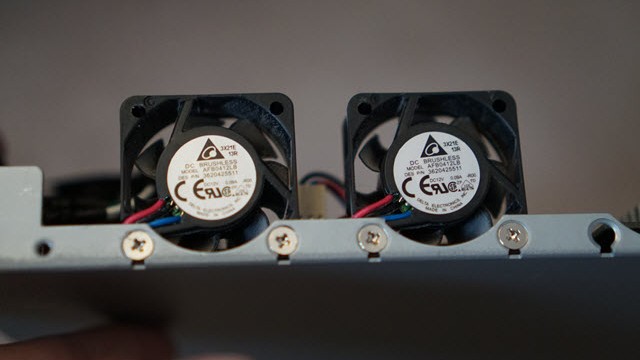 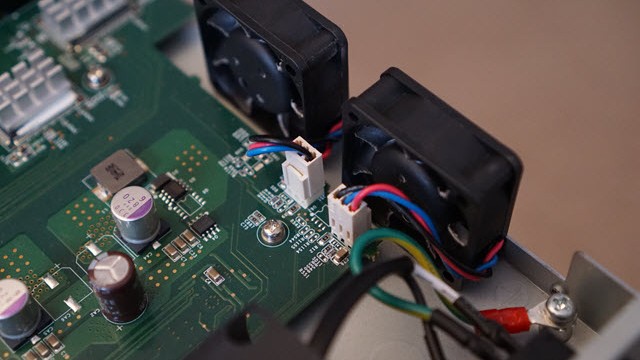 Here’s a side-by-side comparison of the two fans. The Scythe is about twice the depth and uses a sleeve bearing design. It’s also a 2-pin fan, meaning there is no tachometer (aka tach or “tacho”) lead. The stock fan uses a tach (the blue wire).

[symple_box color=”red” fade_in=”false” float=”center” text_align=”left” width=””]As a heads up, the Cisco switch will think your fans have failed because the Scythe fan lacks a tach wire, but I didn’t care about that. If you do, find a 3-pin fan.

If you have a suggestion on a 3-pin fan that is <20 dbA and no thicker than 20mm, please share with everyone in the comments below. :-)[/symple_box] 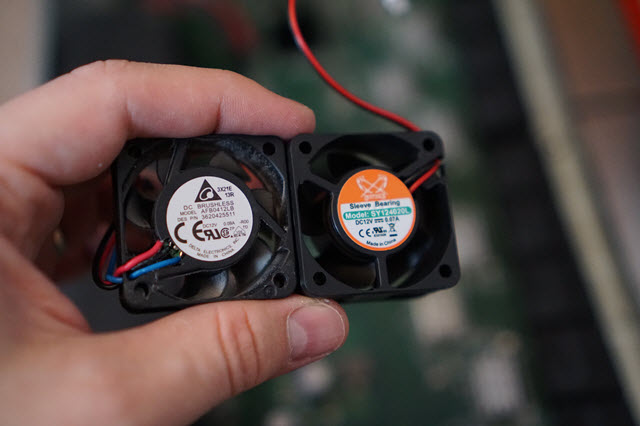 The pin-out configuration of the stock fan is 12V – tach – ground, while the 3-pin converter that comes with the Scythe fan is ground – 12V – empty. This won’t work. 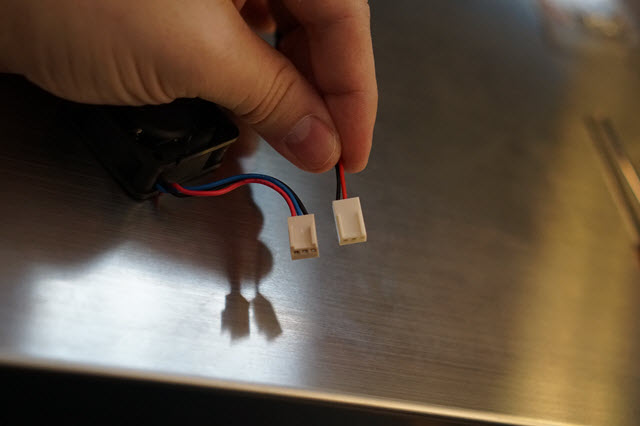 Go get your soldering set, wire cutters, and 1/16″ heatshrink. You do have these things, right? If not, you’re in for a real treat – soldering is fun. 🙂

[symple_box color=”red” fade_in=”false” float=”center” text_align=”left” width=””]Alternatively, you can use a small flat head screwdriver used for glasses repair or a molex extractor kit to remove the pins from the connector without the need for splicing the wires. I have bad luck with this and often end up breaking the pins, so I opted not to use this method. However, it is entirely up to you. For those that wish to splice, I’ve covered the basics of soldering the wire below.[/symple_box] 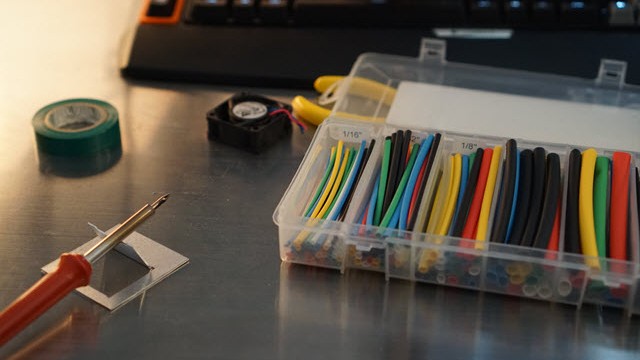 Cut the connector and a length of wire from both the stock fan and the new Scythe fan and strip about 1/2″ of insulation off the ends. We’re going to re-use the stock fan 3-pin connector with the new fan so that the pins match. I also removed the tach (blue) wire since it serves no purpose with a 2-wire fan. 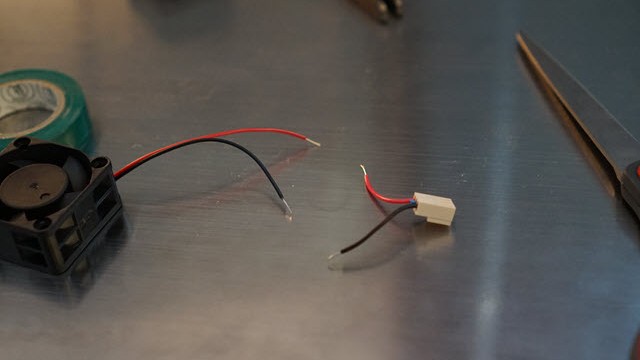 Slip on a small bit of heatshrink (I like to color match mine) and do an in-line twist of the wire. Heat the wire (not the solder) for about a minute, then apply your solder directly to the wire until it absorbs a small amount of solder. I prefer small diameter rosin-cored solder that is available at any respectable hardware store. 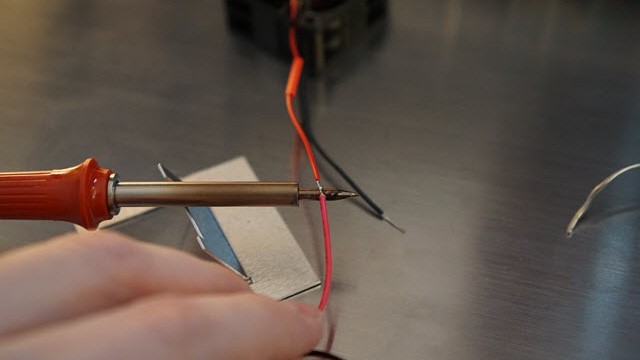 Let the wire cool for a minute before slipping the heatshrink over the exposed wire, mainly so that it doesn’t try to start shrinking when it hits the edge of the wire’s insulation (the wire itself cools very rapidly). Don’t use the soldering iron on the heatshrink unless you’re really lazy – it can melt the tubing and burn into a chemical vapor. I borrow my wife’s hair dryer in most scenarios. 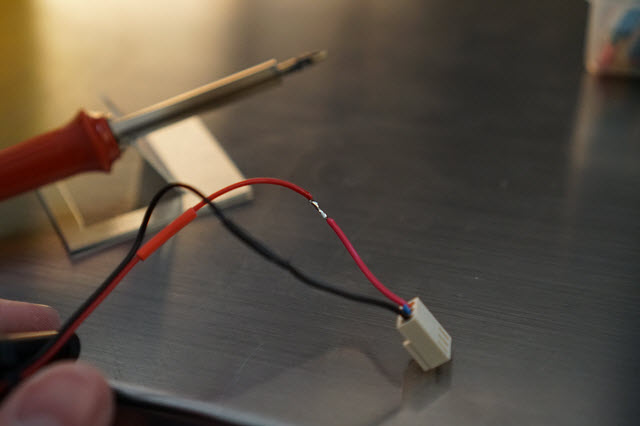 Test the fan by plugging it into the switch and powering on the switch – if it works, great job. Otherwise, you may have to splice the wire again and give it another shot.

Mount the fans into the switch. Because of the size of the Scythe fans, only the fan closest to the PSU (rear of the switch) needs to be screwed in. The other fan is held by compression and will be slightly off from the screw holes anyway. Aim the fan wires towards the “gap” between the two fans to make cable management simpler. 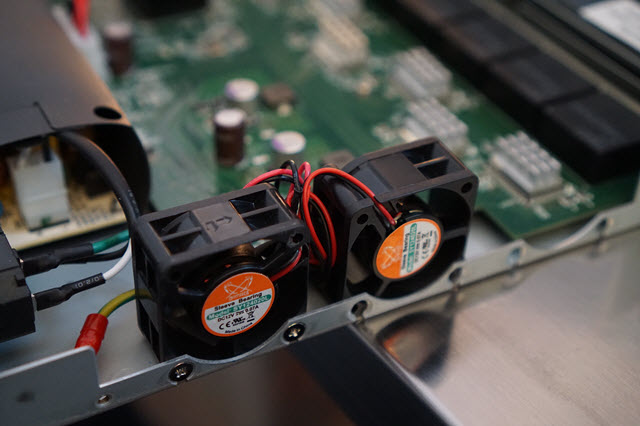 Tuck the wires between the fans. For some reason Cisco put the rear 3-pin power receptacle in the path of the fan’s airflow, which is kinda dumb. Oh well. 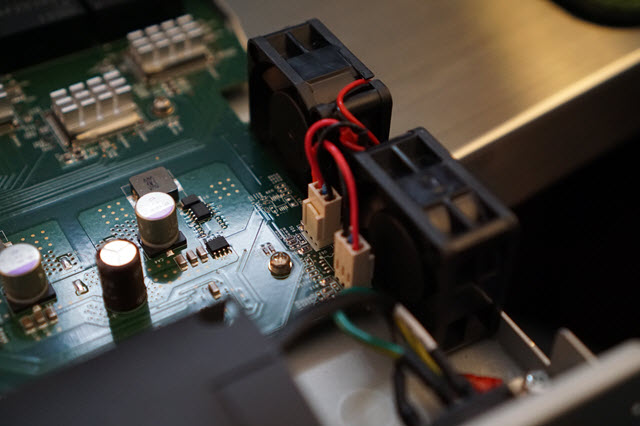 The fans are so silent that they cannot be heard. The room itself is now louder than the Cisco SG300-52 switch. Mission accomplished. 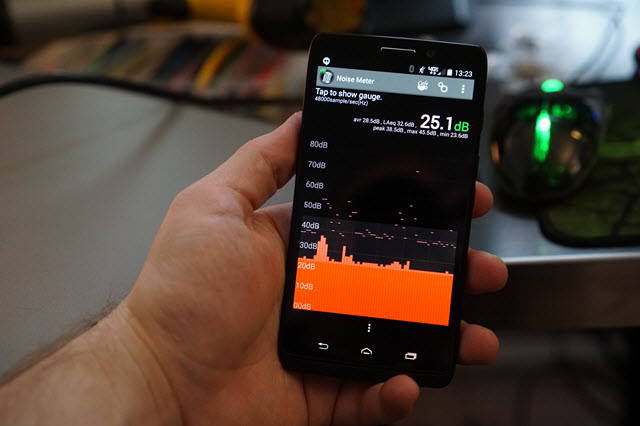 Here’s what the new fans look like with the enclosure back on. 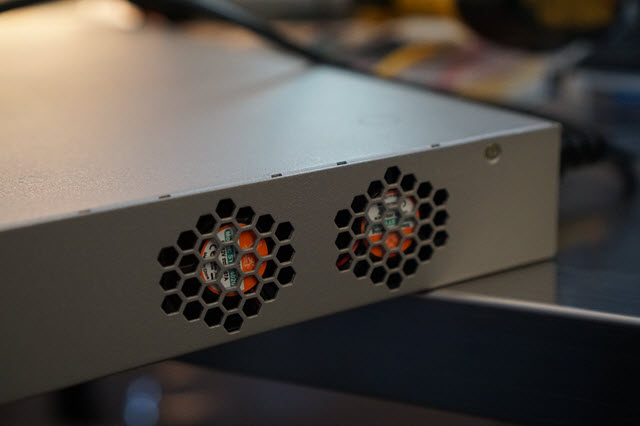 As I mentioned earlier, the switch will change the health status of the fans to fail and the system light blinks yellow instead of green due to the lack of tachometer info flowing from the fan. I give this a big “meh” but that’s just me. 🙂