While it’s fun to design, build, and operate a home lab, there are other costs to consider for software and licensing. I recently received an email from a gentleman named Steve asking about licensing costs for the VMware software in my home lab. While I’ve answered questions on this in various pockets of the Internet, I’ve not yet dedicated a post to licensing. Thanks to Steve, I’ll resolve that here.

Let’s start with the retail purchases. I own copies of VMware Workstation that were purchased using my own monies across various releases (I’m still using version 10 right now). It’s a great way to perform ad-hoc virtualization on my desktop, and was my primary platform when teaching courses for Pluralsight. If you’re not keen to buy the software, there are often gift-card looking giveaways that contain a single-use license for Workstation (PC) and Fusion (Mac) at VMware User Group (VMUG) and VMworld events. I also purchased the VMware Workstation license for Vagrant – because it’s awesome and I support HashiCorp.

If you’re new to building a home lab, these are the only two pieces of software you need to get started. Plop them on your desktop or a laptop with some horsepower. Take over the world.

Next, let’s talk about the VMware software running in my home lab servers.

All of my VMware vSphere licensing comes from a single source: being a VMware vExpert. Each year, the vExpert program doles a year’s worth of free licensing to each member. It’s a nice perk. In my specific case, the VMware Certified Design Expert (VCDX) certification grants vExpert status (so long as I remember to submit an application), although I previously submitted by way of community contributions (blogging, podcasting, presenting, and whatnot). I’ll leave it to you to decide if this path is appealing.

If that doesn’t tickle your fancy, the second option is becoming a VMUG Advantage member to gain the EVALExperience benefit. The cost is fairly low, around $200 USD, and you can always find a discount code if you attend a VMUG UserCon or purchase with a group of people. EVALExperience grants a large chunk of licensing for one year. VMUG Advantage includes a number of other benefits – such as discounts on Workstation or Fusion, VMware courses, certification exams, VMworld, and more. Here’s the list: 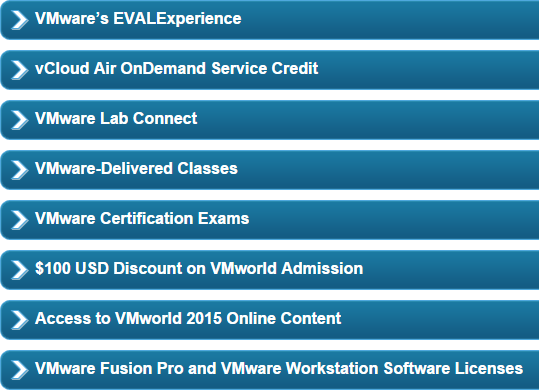 It’s worth noting that both the vExpert and EVALExperience licenses do not require lab re-builds when the licenses expire. You simply renew, get new license keys, add them to vSphere, and then migrate your products over to the new keys. At that point you can purge the old keys. Easy!

If you want completely free licensing, you’ll have to settle for 60 day trial licenses from VMware. I will admit that some of my licenses were granted to me directly from VMware to kick the tires with their products, such as VMware NSX, which was granted as part of my VCDX-NV efforts. I guess there has to be some perks, eh? 🙂

These days it’s easier than ever to get VMware licensing. The only option in previous years was to use the trial licenses or bug a channel partner for the quarterly sales / demo keys, which wasn’t a legit way to do it (but people do it). If I’ve missed an affordable way to get VMware licenses for a home lab, please let me know.

Note that hosted labs, like VMware’s Hands on Labs, require no licensing commitment from the user. But it’s not a home lab. 🙂