As a global vagabond, I’m always interested in playing around with devices that are travel-friendly but still able to empower my creative juices. For a long time this boiled down to various laptops – such as my HP SpectreXT Ultrabook and HP EliteBook Folio 1040 – but has recently pivoted over to more tablet-like devices. In fact, I’ve spent a good chunk of the last 18 months using my Microsoft Surface Pro 3 device as my primary travel compute device. I didn’t ever write up a review on the device, but the cliff notes version is that I really liked the device, the form factor, and the ability to use it like a tablet for presentations and electronic whiteboarding.

Over time, the Surface Pro 3 began to show its age and really didn’t have enough horsepower to run virtualized workloads or any significant number of applications. I still keep it around the house as a casual compute device for writing and social media, but it’s no longer in my travel messenger bag. Now days I split my time between two new devices: the HP Elite X2, which I’m going to focus on for this article, and a Microsoft Surface Book that I’ll discuss in another post.

Disclaimer: HP provided me with a review unit which was used in this post. No other consideration was requested.

Upon setting up the device, I noticed quite a few asthetic differences between the HP flavor of tablet and others that I’ve used. For one, the display has a chromed out metallic bezel that runs all the way around the edge and is completely sealed. To contrast, the air holes in other devices get clogged up with debris and break the “smooth” look of the metal. Additionally, the kickstand for the Elite X2 is a thin band of metal with a circular, brushed metal hinge that really pops. These little touches give the X2 an executive polished feeling. 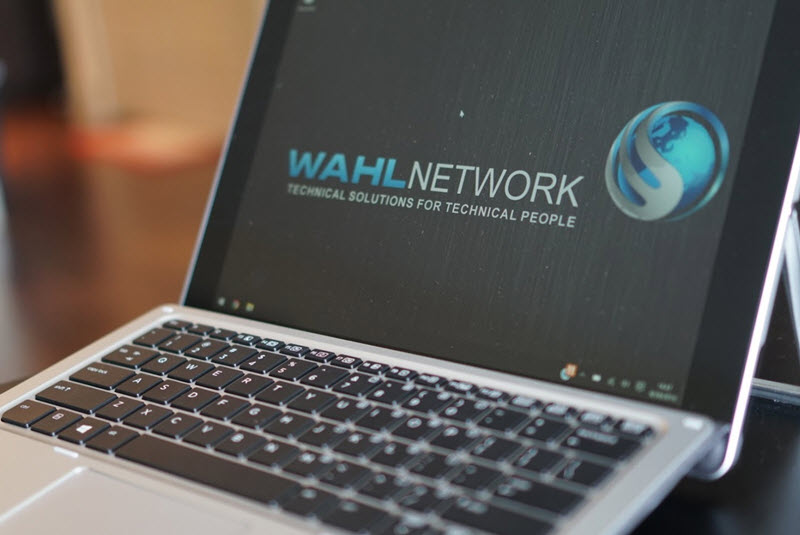 The keyboard is magnetic and detatchable as you would expect. It has a felt-like material for the backing and edges, which is soft while remaining strong. But the real magic is the keys themselves and how they feel when typing.

Let me back up a step: I use mechanic switches for my desktop keyboard – specifically the Cherry MX Brown switches – and am usually disappointed with thin keyboards because they use a compression plunger instead of a switch. The HP Elite X2’s keyboard has some real meat to the key switch pressure, which results in a pleasant tactile experience without making any clicky key noises that I find distracting. 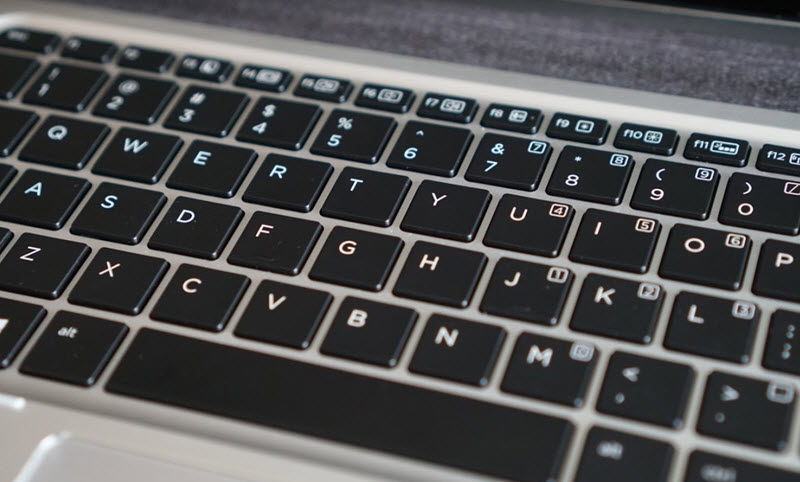 As a side note, people who like the noise usually opt for Cherry MX Blues or the classics: an IBM Model M or KeyTronic clicky keyboard. 🙂

One feature that I really liked about my HP EliteBook was the inclusion of a fingerprint reader for gaining access to the device. It’s clutch for using the device without worrying about a keyboard to log in. While my Surface Pro 3 doesn’t have one at all, the HP Elite X2 has one embedded on the back side of the tablet.

I’ve included a photo below showing where it’s at. I ended up adding my fingerprints from the index and middle fingers on both hands to the security profile, meaning I could quickly lock and un-lock the tablet without worrying about having the keyboard handy or pecking out those little on-screen keys (which I detest). If that’s not your cup of tea, you can also use a PIN code or a full password. 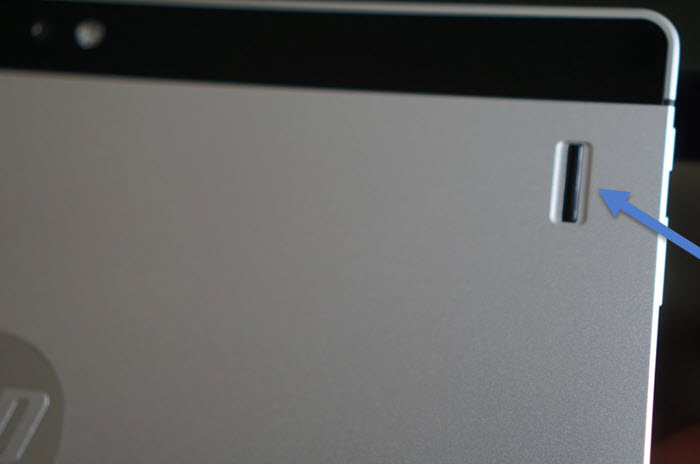 Beyond physical security, I also liked the experience of the HP Support Assistant. This is weird for me because I typically wipe any new device and install from a fresh image. HP told me the software was going to actually be helpful and lightweight so I gave it a whirl. Below you can see the main dashboard, which lists out all of the pertinent details on my device with room for modular cards representing any other supported devices. I’ll admit – this is a handy view, especially when adding the other HP laptops / tablets to the list or for a family that wants a single pane of management for a set of devices. Imagine triggering patches for Mom’s device remotely! 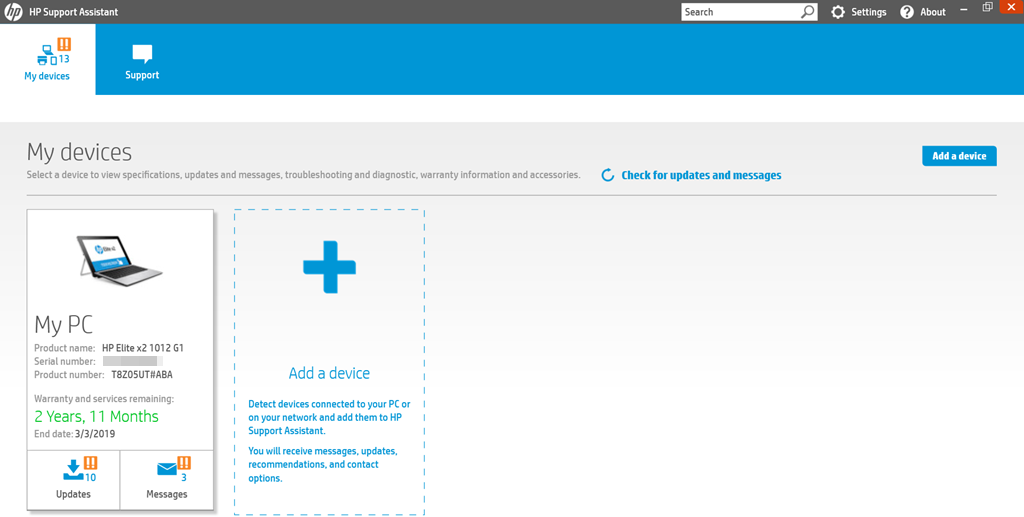 Drilling down deeper, the Elite X2 shows all sorts of details and can offload the responsibility of patching / firmware management to the HP Support Assistant. I opted to let it handle the entire sweep of updates. 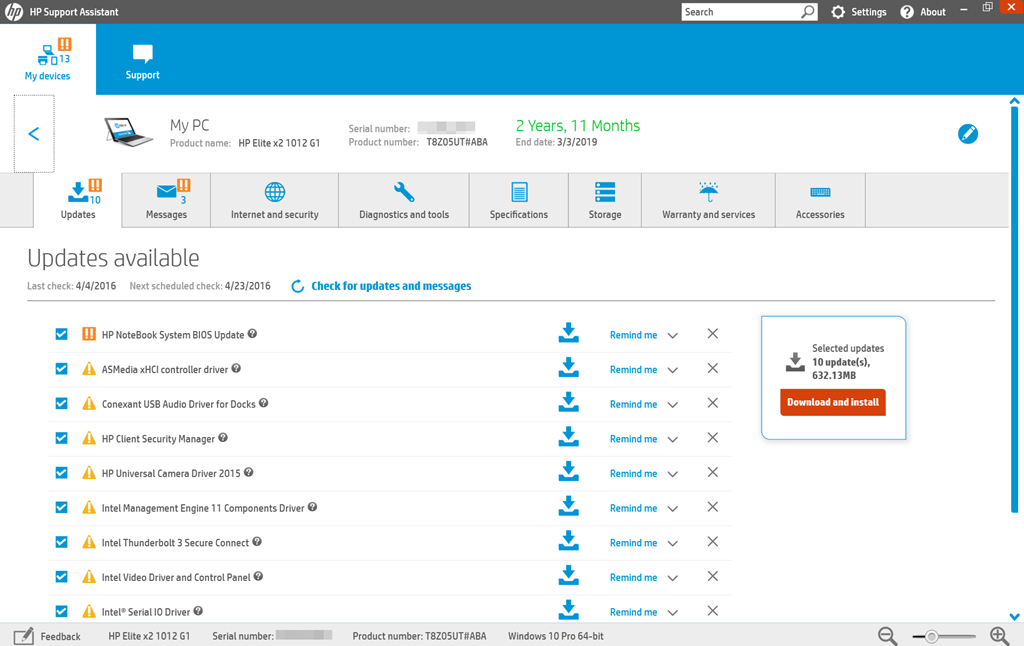 From there, the installation wizard shows a progress tree with installation bars for each item. I dig that the entities are abstracted from their usual cryptic names – downloading patches for laptops off the web is often a frustration-laden process with a lot of trial and error for me. The wizard went through my device and quickly took care of all my drivers, patches, and firmware updates, including reboot warnings when it needed to install something without the OS running. 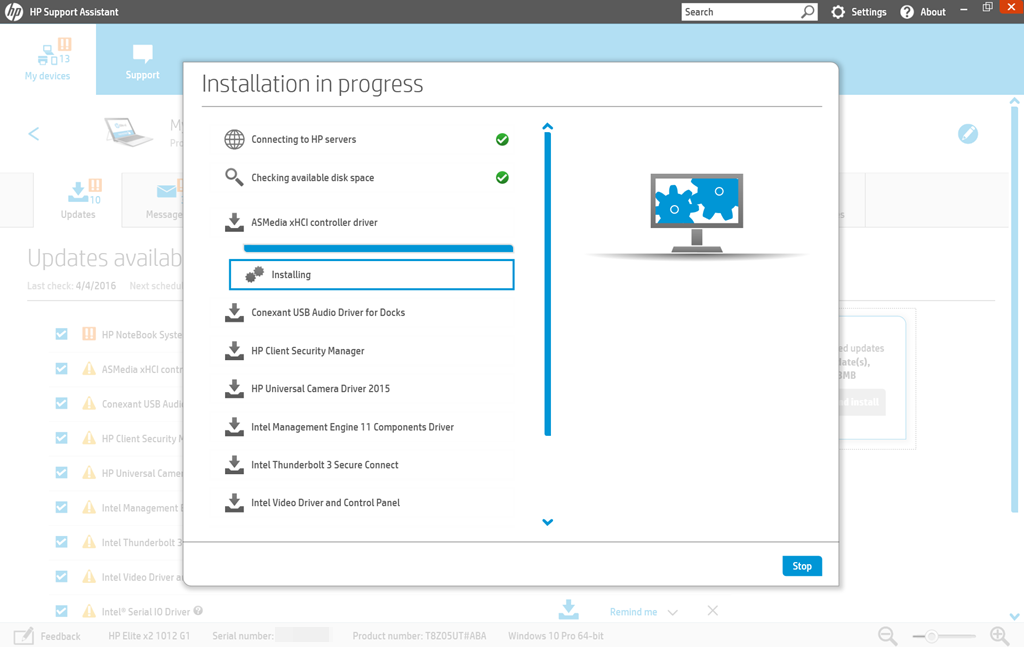 I found this process extremely painless. I’m sure executives and non-tech folks would really like to offload the “nerdy patch stuff” to a reasonably intelligent assistant, and the HP Support Assistant doesn’t disappoint.

Almost all of the above items are moot if the device constantly thirsts for juice. First, let me tell you that I am supremely impressed with how long the battery lasts for the Elite X2. I rarely bothered to plug it in and often took it out to write some PowerShell code, watch an episode of Daredevil on Netflix, or get some writing done via Google Docs. I can’t recall ever needing to charge it with less than 6 hours of real usage. 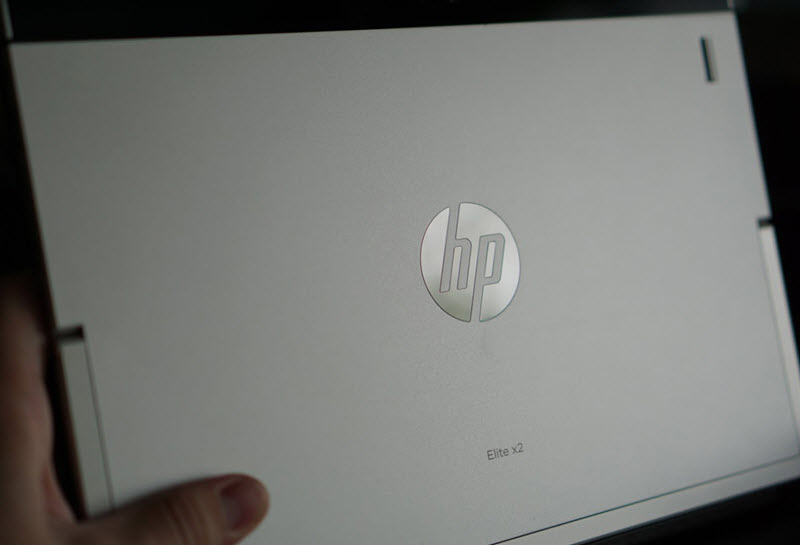 After jumping on a briefing call with HP, they pointed out that long battery life was a chief goal. This is why they chose a slightly less beefy processor from the Intel M5 line and is why they don’t need any special air holes along the bezel. The model I evaluated is the HP Elite X2 T8Z05UT#ABA with the following hardware specifications:

The other slick feature is that the tablet charges using a USB-C cable! This is awesome, because I recently made the shift to USB-C in my house: my Android Nexus 6P, portable battery charger, and now my Elite X2 all use USB-C. This means I only need one single type of cable to run my entire bag of goodies. I’m a huge fan of carrying less junk around, because every gram of weight I remove is less I have to lug around all the time. I also found that having a bunch of cables is the reason I am frequently given the “enhanced security screening” by the American TSA after asking an officer when it happened for the third time.

Overall, this has been HP’s best device that I have had the pleasure of experiencing. It hits all the right notes for me – it’s portable, great battery, has a slick finish, responsive keyboard, and uses the next-gen power tech. I still like my Surface Book as a full desktop replacement device (loaded with RAM and a huge SSD) but it’s not really fair to compare a device that costs 3x to the Elite X2.

Did I miss something that you’re interested in? Drop a line in the comments below and I’ll edit the post with more details.