Ravello, one of Oracle’s recent acquisitions, has been quiet for the past year. Which is a shame, because they seemed like a fun, energetic, and community focused group – after all, they gave away Ravello licenses to vExperts and even supported nested virtualization for home lab tinkering scenarios. The silence ends today as I sit through a barrage of deep dive and visionary content during the Ravello Blogger Day (#RBD1) briefings from several members of the team.

So, what’s with the silence? This stems from being primarily focused on the integration with Oracle for back-office systems (such as billing) and furthering the development of the Ravello platform. Navin Thadani, VP of Product Development for Oracle Ravello Cloud Service, and his team sees this as a strategic effort that furthers the next generation of the product and visionary direction. During this period, it is worth noting that the team continues to offer a free service to VMware vExperts who wish to kick the tires or set up lab environments using their solution.

Before I dive into the Ravello content, though, let’s first start with the Oracle Cloud details. It’s important to start here as Ravello is taking advantage of the Oracle Cloud for hardware assisted virtualization and even bare metal virtualization. I’ll admit that prior to this briefing I had little exposure to what Oracle was doing in the cloud space.

Clay Magouyrk, VP of Oracle Cloud Infrastructure, is a groovy gentleman who presented to the group in a t-shirt and jeans and admits to have never using VMware products but really digs the cloud. His focus is on the cloud infrastructure side of the business spanning from Oracle Cloud to Oracle PaaS / SaaS offerings. He professes that building a “second generation cloud” (queue the marketing whisky shot) was a big initiative that required setting up shop in Seattle, hiring a team of veterans who have done successful cloud deployments, and zooming from zero to over a thousand employees focused on the cloud solution in about 3 years.

Their goal is to blend what’s best about cloud – pay as you go, elastic resources, friendly for developers – with what the enterprise comes to expect around a solution – adheres to SLAs, includes support, governance, and so forth. For Oracle, this is done using an Availability Domain. These are data centers constructed for highly available and scalable resources that are somewhat analogous to Amazon’s Availability Zones.

Clay boasts that an AD doesn’t over-subscribe bandwidth by leveraging a fast, flat, predictable physical network with over 1 million switch ports per data center and a suite of virtual networks used as a private overlay with access to hosts, storage, VMs, Oracle engineered systems, middleware, etc. for the customer to manage.

The result is being able to offer bare metal access for customers who need that sort of thing, rather than assuming that everyone is comfortable with working on top of a hypervisor. It’s not really possible to defeat AWS by mimicking their features, so having some differentiation for an enterprise customer – e.g. not oversubscribing bandwidth – can help with capturing the applications that rely on this sort of guarantee. 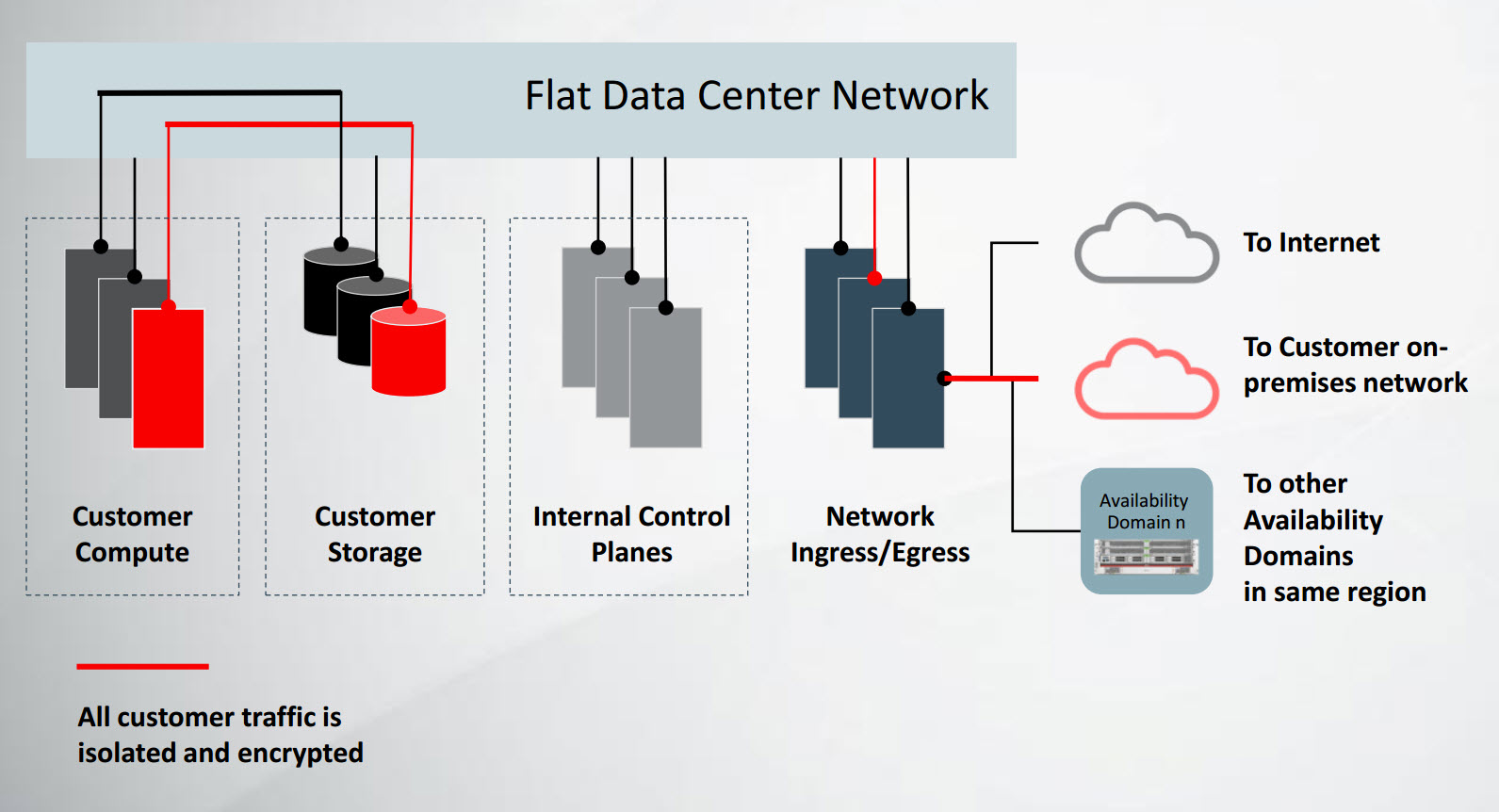 Tenancy controls are abstracted at the “compartment” layer. It provides separation of environments – such as production, staging, test, or development – with attribute-based policies controlling access to the API. Using the API is also logged with an audit service providing per-account logs.

The end goal is to provide an environment to run any sort of application. As stated by Clay, “if it works on-prem, it should work in our cloud.” He thinks that enterprise organizations aren’t dumb or lazy when it comes to laggard cloud adoption, but simply dealing with the daunting challenge of handling decades of applications built on solutions that aren’t cloud friendly. Which makes sense to me – these applications are often what fuels the business from a financial perspective. There’s a huge sunk cost in these beasts (development time, maintenance, feature work, etc.). Unlike new applications that float around on container rocket cars, these older and financially impactful applications are not easily transformed into cloud native application formats.

Pricing seems relatively competitive, with many examples of Oracle Cloud pitted against AWS with all items being cheaper. Beyond this, there is also a payment model using monthly commit options. In this scenario, a customer can propose a spend rate (let’s call it $1000 a month) that can be used on any resources within the Oracle Cloud at a discounted rate. Thus, the $1000 investment may yield something like $1200 worth of resources. If you exceed the commit number, the resources are charged at list price; failure to hit the commit rate still results in spending the $1000 investment. This falls in line nicely with how most enterprises like to budget their costs – figure out a 1-2 year spread, appropriate funds, and then deal with a net 30/60/90 based on invoicing.

The biggest downside I can see? There’s only two regions based in the US with one European location coming online later this year. If you’re not located in the US, or just don’t want your cloud provider to be based out of the states, you’ll need to shop elsewhere.

Now that I’ve updated your noodle on the Oracle Cloud offering, let’s shift gears back towards Ravello. If you’re new to the company, the offering is essentially an overlay cloud service that allows you to take any VMware based application, using one or more virtual machines, and run it in any cloud without making any changes to the workload, network, or storage. In a nutshell, it consists of nested virtualization engine, overlay networking, and storage overlay.

The nested virtualization engine is designed to run on already virtualized hardware by using a binary translation for direct execution. This is used to expose VMware or KVM virtual devices to run a VM on anyone’s cloud. The overlay networking provides the distributed switch / router / network services needed to grant a “clean” L2 network to the virtual machines. This handles the requirements around static IPs, VLANs, VXLANs, PXE booting, and network appliances. And the storage overlay obviously handles the required block storage needed by the workloads.

This begs the question – after a year of sharpening pencils and guzzling coffee, what has the Ravello team been up to?

Here are some of my notes on what the team is bringing to bear.

Expect a global routing network with public IPs in every geography with over 30 regions available by the end of this year. Today, it appears around 20 are already available globally with another 10 coming online in the future.

With the availability of bare metal via the Oracle Cloud environment, Ravello has the ability to use both hardware assisted nested virtualization (by way of virtualization extensions) and running on bare metal. This would result in HVX running directly on the host itself without having to form a virtual machine abstraction layer which is the architecture of nested virtualization. Performance gains of 550% or more were promoted as a big advantage of using hardware to assist in the execution process (when compared to purely using software).

Host anti-affinity to ensure that failover pairs are created to dodge the single point of failure bullet for tiered applications. This can also be done for performance reasons where resource hungry workloads would not share the same underlying host. Additionally, Ravello plans to detect and restart virtual machines when a failure is detected.

From a data sovereignty perspective, workloads can already be locked down to run in specific cloud regions.  Enhancements are on the way to restrict library stored images to only be stored in specific regions. This prevents images – which contain all of the sensitive information that still lives within governance requirements – from being stored in locations that are not deemed allowable by security and compliance teams.

The idea is to target most of the enterprise that has been ignored by the remainder of the world. Those unsexy, heavy, old applications that chug along and fill most company’s coffers with cash. It’s not all that feasible to refactor these applications in the near term, so providing a cloud environment that can go down to the bare metal for the 5% of “really tough” applications is offered as something the enterprise would like to consume when compared to co-locations or running their own data centers. For the remainder – the 95% or so of general purpose and “simpler” applications – the use of Ravello can be leveraged to essentially do a binary copy of the applications directly into Oracle’s cloud offering. These level of effort is advertised as being quite low due to the presentation of network, storage, and compute topologies by Ravello.

It sounds neat. But, there’s still a lot of work to be done. To be fair, the Oracle team admits as much but seems eager to roll up their sleeves and “dig the 100 feet necessary to pour a really solid foundation” for the data center.